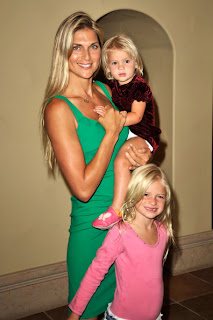 Last week on my blog, I wrote about volleyball star and model Gabby Reece's comments about her role as wife and mother. In a much discussed (and trashed) appearance on NBC's "Today," Reece said, via the Huffington Post:

“I think the idea of living with a partner is ‘How can I make their life better?'" Reece told "Today's" Natalie Morales. “So if I’m the woman and he’s the man, then yes, that’s the dynamic. I’m willing and I choose to serve my family and my husband because it creates a dynamic where he is then in fact acting more like a man and masculine and treating me the way I want to be treated."

Reece recently wrote a memoir called "My Foot Is Too Big For The Glass Slipper," in which she claims, “to truly be feminine means being soft, receptive, and –- look out, here it comes –- submissive.”

There was an immediate backlash, which to me, isn't surprising. Many Christian women today even balk at the idea of submission (except, interestingly, when it's "Fifty Shades of Grey"-type... and I'm going to leave that alone).

While thinking about Gabby's comments, I remembered a passage of Scripture that really exemplifies servitude, and I'm not talking about Paul's much debated writings to the Colossians, either. No, this is from the gospel of John, chapter 21:

Afterward Jesus appeared again to his disciples, by the Sea of Galilee. It happened this way: Simon Peter, Thomas (also known as Didymus ), Nathanael from Cana in Galilee, the sons of Zebedee, and two other disciples were together. “I’m going out to fish,” Simon Peter told them, and they said, “We’ll go with you.” So they went out and got into the boat, but that night they caught nothing.

Early in the morning, Jesus stood on the shore, but the disciples did not realize that it was Jesus.

He called out to them, “Friends, haven’t you any fish?”

He said, “Throw your net on the right side of the boat and you will find some.” When they did, they were unable to haul the net in because of the large number of fish.

Then the disciple whom Jesus loved said to Peter, “It is the Lord!” As soon as Simon Peter heard him say, “It is the Lord,” he wrapped his outer garment around him (for he had taken it off) and jumped into the water. The other disciples followed in the boat, towing the net full of fish, for they were not far from shore, about a hundred yards. When they landed, they saw a fire of burning coals there with fish on it, and some bread.

Jesus said to them, “Bring some of the fish you have just caught.” So Simon Peter climbed back into the boat and dragged the net ashore. It was full of large fish, 153, but even with so many the net was not torn. Jesus said to them, “Come and have breakfast.” None of the disciples dared ask him, “Who are you?” They knew it was the Lord. Jesus came, took the bread and gave it to them, and did the same with the fish. This was now the third time Jesus appeared to his disciples after he was raised from the dead. [emphasis mine, adf]


This is an awesome chapter, full of so much meaning. We've got Jesus having risen from the dead, but not yet ascended to Heaven, the reinstatement of Peter after his thrice denial, a miracle, and His command to "Feed my sheep." But just focus on the words in bold. While the disciples were out fishing, Jesus, the Risen Lord, the Savior, the King of Kings, took the time to make a fire on the beach. Then He prepared breakfast. Jesus hovered over a hot fire and fried up some fish, ya'll. Then He served it to them. He had been tortured, crucified, beaten death and there He was, serving.

And unlike Gabby, who chooses to serve her husband and kids, Jesus was serving the very ones who had abandoned Him during His darkest hours.

In Ephesians 5, we are told to be "imitators of God," submitting ourselves to each other. In I Peter 5, we are admonished to "clothe yourselves with humility". It's counter-cultural, it's not of this world, but to become like God, we must lower ourselves. Gabby might just be on to something.


How do you feel about submission?
In what ways do you serve? Your family? Your church? Your neighbors?  Your enemies?