"Ceremony Before Sex" By Darian A. WIlliams

Would you rather be a leader or to follower?

Most would probably say leader, it is an obvious choice.  A leader is depicted as being strong, courageous, and assertive.  To be labeled any of these words would build confidence and faith in ones self.  Followers are sometimes depicted as a lesser adjunct.  The one who didn't have the strength, will, or power to position themselves above the norm.  True to a certain extent, but by whose definition?  As far the church is concerned; the sheep, the flock, we are, in a sense, incapable, weak, inferior, but inferior only to our leader, Jesus the Christ.  Let it be told, according to the Bible, He is the only one in whom we are inferior (Genesis 1:26).  That includes powers, principalities, things seen, made, and that will be made.  We, the church, already have a leader, someone who was and is strong, was and is capable, was and is God! We don't need anymore leaders, nor do we have to be leaders.  We just need to follow, to serve, to compliment, to represent our leader. Romans 12:1-2, tells us to not be conformed to the world, because the world is unsure of herself.  She changes with what is most common, most accepted or what feels right.  For example, nowadays sex is just sex, it's common place, it's casual.  You don't have to put on a 3 piece double breasted suit to approach it anymore, you can do that with a tank top, saggy jeans, scuffed sneaks and some dreads.  So as for the church, we don't need to follow the world 's example, we don't dim it or make light of it just because of what is going on around us.

In my 12 years of salvation, I have seen this transformation.  The lack luster responses to the standards of God.  I have seen how casual we have become when it comes to approaching this subject.  And I was sick and tired of seeing and hearing about it.  That is why I wrote "Ceremony before Sex", my first internal composition. 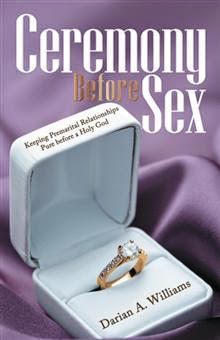 I am aiming to be an advocate for the sanctity and purity of the Body of Christ. I want to break down and build up, to encourage, to assist, to crack open the windows of escape (1 Corinthians 10:13).

Leaving the rest for you to decide if you want to take that route and open the window all the way.  If you are married, single, engaged, booed up, booed down, in between or even contemplating a relationship, this book is for you.

I ask not for your support for my sake but for the cause.  I need minds and mouths to get this accomplished.  If you read the book, tell someone about it, let them borrow it, or sow it to them and pray for change to occur.

Ceremony Before Sex, is on sale online now at amazon.com, barnsandnoble.com, and westbowpress.com. Search for it using the title, purchase it, and be open to the idea of investing in yourselves and others.

Thank you so much for your support.

Author, Darian A. Williams
Posted by Carla Marcelle at 4:02 PM