I attended a "Christian Women In Media" networking event yesterday to spread the word about the Kingdomwood International Film Festival that I'm helping to produce. At the event I was sitting next to the moderator, so it was funny to see that during the "introduce yourself and what you do" period, the majority of the women who were there went on tangents about what divine coincidence it was that brought them to the meeting or gave testimonies about the why they were passionate to do what they do.

I laughed as the moderator tried to get them to be quick about their turn to introduce themselves, but after a while as the introductions continued in the same format of a longer "why" instead of a quick "what" and "who", I was inspired by it.

It was touching to see that the default mode for a room full of women who were believers was to explain the "why" behind what they did. I think knowing and understanding the "why" is the key to doing what we do with excellence and staying motivated to do it.

I think that would've been great for a "Christian Women In Media" event, but we're all catalysts of GOD's voice. I listened to the "Jesus and Jolloff" podcast for the first time and heard Yvonne Orji say her blessings are "not because she's so special, but because she's available." It's essential to make ourselves available to the will of GOD. 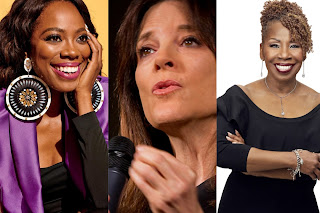 
"The key to success is not what you do, it is how you feel about what you are doing."


It's up to us to Boldly be a vessel for what GOD is doing in the earth. Orji also says in the podcast" Somebody is waiting for your supply, that they didn't even know they needed."

"We were born to make manifest the glory of God that is within us. It's not just in some of us; it's in everyone. And as we let our own light shine, we unconsciously give other people permission to do the same." - Marianne Williamson

It's up to us to know who we are and be consistent in how we present who we are to the world, but also to definitely know our why? Do you know your why?


I'll leave you with this:

Whatever you do, work at it with your whole being, for the Lord and not for men, - Colossians 3:23