The Clark Sister's Biopic Set For Easter Debut On Lifetime 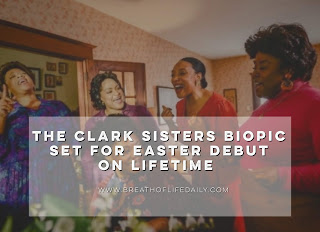 The anticipated Clark Sister's biopic has officially set a premiere date. The film will debut on Lifetime Network Saturday, April 11th at 8 pm ET. This will be on "Easter Saturday" as some would call it.

The Clark Sisters: First Ladies of Gospel, is the official musical tale of the incomparable gospel singers, The Clark Sisters.  The film recounts the story of the highest selling female gospel group in history and of their trailblazing mother, Mattie Moss Clark played by Aunjanue Ellis.

The icons are credited with bringing Gospel music to the mainstream. Grammy Award winners Queen Latifah, Mary J. Blige and Missy Elliott serves as Executive Producers on this project.

The official hashtag is #TheClarkSisters @LifetimeTV.

Watch the official trailer for
﻿THE CLARK SISTERS: FIRST LADIES OF GOSPEL below:
Posted by April Reign at 7:59 AM