My heart hurt when I heard. I've never met Ntozake Shange a day in my life, but to me she is family. In her work I found a sense of meaning not only as a black woman, but also as a creative writer. Ntozake Shange's life and work liberated so many people in numerous ways. I'm grateful for her boldness and that the positive impact she created will continue through her stories.

I remember sitting in a book store one day reading "For Colored Girls Who Have Considered Suicide / When the Rainbow Is Enuf" I felt empowered, understood, and connected. Also, that the choreopoem had so much more substance than the film. It was real, raw, and liberating. Reading the book by Ntozake Shange made me feel like I wasn't alone in the world and that I can also have a voice despite all the systemic "dilemmas" of black womanhood.

That's why hearing the news of Shange's death felt like a huge shift in the world. She is a legend that will be truly remembered. Ntozake Shanges work touched so many people, "For Colored Girls Who Have Considered Suicide / When the Rainbow Is Enuf" was just one of her most popular pieces. 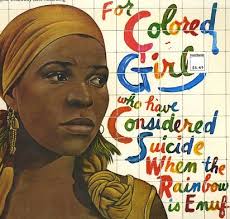 Shange, born Paulette Linda Williams in 1948 in Trenton, NJ was a Poet, Novelist, and a Playwright. Some of her popular pieces were Sassafrass, Cypress & Indigo (1982), Liliane (1994), and Betsey Brown (1985). "For Colored Girls Who Have Considered Suicide / When the Rainbow Is Enuf" produced in 1975 touched the lives of black women across multiple genrations and introduced the word "choreopoem" into the dictionary.

In 2010 "For Colored Girls Who Have Considered Suicide / When the Rainbow Is Enuf" was adapted into a film, produced by Tyler Perry. Shange's work has won and been nominated for several major awards. Shange earned a Master's Degree in American Studies in 1973. She was one of the most notable creatives in American culture.

StarTribune reported that Shange died in her sleep "in an assisted living facility in Bowie, Md., where she lived." From her creativity and perhaps in her death, the peace of the rainbow was eternally on Shanges side.

A prolific writer and creative Shange is survived by her relatives, and the countless lives she's touched through her amazing literary work.

How did Ntozake Shange's creative work touch your life? Leave your comment below and connect with us on all social media channels @BOLDJournal for more updates.

More details on Ntozake Shange's life from StarTribune:
http://www.startribune.com/obituary-ntozake-shange-pioneering-playwright-poet-and-novelist/498795391/
Posted by April Reign at 9:33 AM