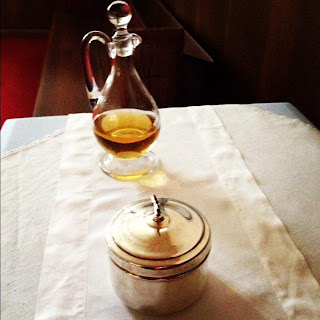 
While they were eating, Jesus took bread, and when he had given thanks, he broke it and gave it to his disciples, saying, “Take and eat; this is my body.”

Then he took a cup, and when he had given thanks, he gave it to them, saying, “Drink from it, all of you. This is my blood of the covenant, which is poured out for many for the forgiveness of sins.


Lent came to a close on Sunday, with the waving of palms and shouts of "Hosanna!". Easter is a few days away, and tomorrow is Good Friday, the heart of the Passion. Today is also a day of note for Christians who follow the liturgical calendar. It's Maundy Thursday. If you're unfamiliar with it, that's okay. I had no idea it existed until about four years ago.

On Maundy, or Holy Thursday, many Christians mark the day by having a service which includes washing of feet, reading of Scripture, and a Communion service.

I was fascinated by Communion as a child. Growing up in a small Pentecostal church, pastored by my late grandfather, Communion was a once a month, First Sunday ritual. All the women wore white, and they would dress the altar in white linens as well. My Papa, standing in the pulpit, would read aloud to the congregation about the very first Communion between Jesus and His disciples at the Last Supper. I would try to conjure up images of that scene, and invariably, they would all look something like this: 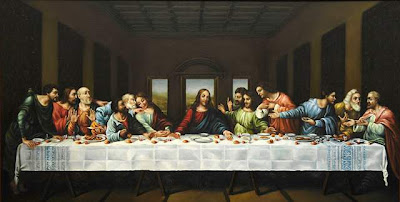 
Yeah, so not original. But I bet you thought the same thing. Anyway, first Sunday after first Sunday, year after year, after awhile, Communion lost it's specialness. I started to view it as the time that kept us in church fifteen minutes longer than usual. When I joined a non-denominational church after college, Communion was far less frequent, and unlike the wine and matza used at my childhood church, it was grape juice and crackers. I thought even less about an event that Jesus commanded us to do "in remembrance" of Him.

In the last few years, I've given much more thought to the practice of Communion, also known as the Holy Eucharist. I've read over the Scriptures devoted to it, and have come to have more respect and a new found reverence. Contemplating on the physical- Jesus sharing a final meal with His followers, who would all abandon Him in a matter of hours. He knew lies, betrayal, injustice, torture and death awaited. Yet, He sat down with the disciples and broke bread in the hours before His body was broken.

In those precious hours before His death, Jesus took the time to pray, not only for the disciples, but for all of us. His prayer is at the heart of Communion:


My prayer is not for them alone. I pray also for those who will believe in me through their message,  that all of them may be one, Father, just as you are in me and I am in you. May they also be in us so that the world may believe that you have sent me. I have given them the glory that you gave me, that they may be one as we are one— I in them and you in me—so that they may be brought to complete unity. Then the world will know that you sent me and have loved them even as you have loved me.


In the practice of Communion, we are to come together, in unity, as the Body of Christ. We- all of us Believers- are one in Christ Jesus our Lord.  United through His Blood, we are to show forth love to God, each other, and the world.

If Communion has become routine, I encourage you to read over the verses, and ask God to make it new again to you. Have a blessed Holy Week!