Engraved on His palms. 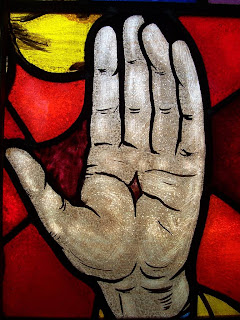 
I've been getting weekly IVIG treatments for CIDP at home for a year now. After taking a couple of Tylenol and a Benadryl to stave off headaches and hives, my nurse (and now good friend) Melissa ties a rubber tube around my arm and taps, squeezes and works my tiny veins to pop up. She then skillfully inserts a small IV, and if things goes well, over the next two hours, I'll receive my medication.

Of course, things don't always go well. I've had vein collapses and tissue blow ups, and sometimes a couple of site changes are needed. I've also gotten use to blue or green or purple bruises taking shape on my hands and arms. They are my little battle wounds, a kind of visible reminder of my fight with chronic illness.

At church on Sunday, my pastor, while giving the weekly announcements, reminded the congregation that throughout Lent on Fridays, there would be Via Crucis or Stations of the Cross. If you're unfamiliar with it, it's pretty much a step by step, often artistically rendered, presentation of the Passion of Jesus Christ, from his trial to his entombment. Around the walls of the sanctuary of my church, there are little plaques depicting each scene. While my pastor spoke, I focused on number 11, or the Crucifixion. I thought about those nails driven through Jesus' hands, the wounds that even after He had risen, were still present. I thought of Thomas, who had to see with his very own eyes those scars, even to the point of touching them, and his exclamation of "My Lord and my God!"

My Lord and my God, indeed. Jesus' "battle wounds" tell the full story. Of the Fall, sin, redemption and the vanquishing of death. They also reveal, as in that verse in Isaiah, the love God has for each and every one of us. You and me, we are engraved on the palms of His hands. Because of our rebellion, he was pierced, yes, but it is by those wounds we are healed.

Meditating on all this, I warmly accept my IV scars. They have become tactile reminders of not just my present battle, but of how the war-against death- has already been won.
Posted by Alisha De Freitas at 8:29 AM