Your Vindication Is From The Lord 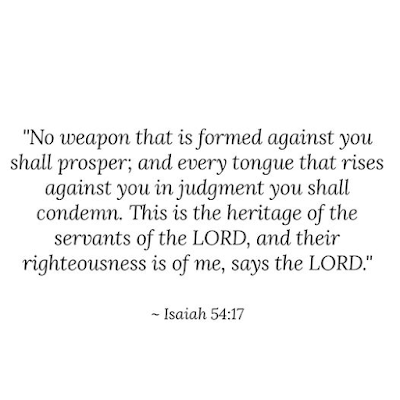 No weapon formed against you shall prevail. It won't be effective. It won't get through if you're a servant of The Lord.

The enemy may try to smash you, but when you lift up your voice to The Lord . . . protection happens, safety happens.

This is the heritage of the servants of The Lord.

Our tongues are lifted up against every tongue that rises against us in judgement, when our heart is turned toward The Lord.

Being surrendered to The Lord is a place that's sacred. It's impenetrable.

As we hide in the shadow of GOD's wings. * The Lord can put words in our mouths to speak against the enemy. Even targeted, specific and intentional words that speak to our specific situation.

The promise here in this scripture doesn't end with "No weapon formed will prosper". It also says "Vindication is from The Lord." If The Lord lifts up His voice and declares a word, it is. That's it.

Nothing can stand against anything that The Lord declares. It's up to us to be in service to The Lord.