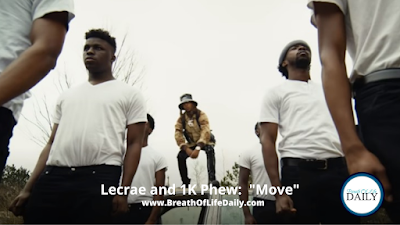 You can do a jig or whatever you want to do, but the single "Move" by Lecrae and 1K Phew will definitely have you "moving it".

The single is from their latest collaborative album No Church In A While.

Besides the production on the song with beats that will get you moving, both Lecrae and 1K Phew spit a few catchy bars on the track.

"Say a prayer on the floor like it's War Room," 1K Phew spat referring to the popular 2015 Film.

In addition to sly verses like "I got the light on me can't lose it" and "light of the world 'til The King is back." The duo came in hot with the rhetoric.

Both rappers shared an unashamed flow for the song that works brilliantly. Check out the official video below to get you moving.

watch the official video below:

"Move," is said to be a fan favorite from the album. The video directed by Jerrell Green & Caleb Seales was filmed in Atlanta, GA.
It finds 1K Phew and Lecrae recreating the drill sergeant scene inspired by the 1995 film, Major Payne, starring Damon Wayans and Karyn Parsons. 1K Phew whipping the Unashamed Army into shape and Lecrae puts them through the drills! Watch the "MOVE" video below. No Church In A While is available for streaming now! To stream now, click here."
Posted by Breath Of Life Daily at 6:56 PM