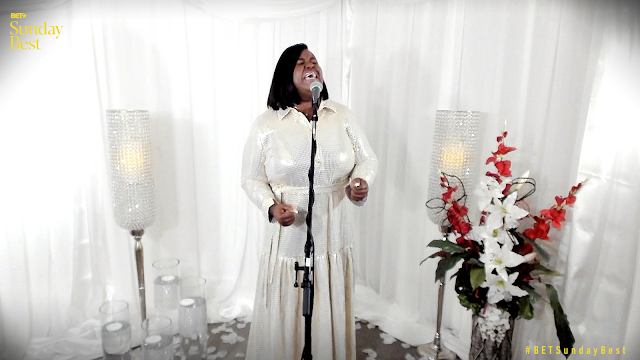 BET Network has officially announced it’s season 10 winner for it's inspirational singing competition “Sunday Best,” this year. Maybe the world wasn't expecting her to win, but America voted for her to win. Stephanie Summers was the contestant who took home the victory. Summers will receive a recording contract with RCA Inspiration, a $50,000 prize and an opportunity to be a featured performer on the McDonald's Inspiration Gospel Tour and the title “Sunday Best.”

Summers is a veteran in the gospel music scene, she's opened up for legends like Pastor John P. Kee, Dorinda Clark-Cole, and others. Her gospel career was side tracked after the death of her best friend and father. After a short period of homelessness, she has once again found her footing and is ready to return to the gospel scene. Her story really proves that it’s never too late to follow your dreams. Today, she lives with her children in Colorado Springs, CO.
The season 10 finale episode of Sunday Best featured original performances by show judge Jonathan McReynolds feat. Mali Music with “Movin’ On;” show judge Erica Campbell with “You;” The Clark Sisters with “Victory;” Kierra Sheard with “It Keeps Happening” and season 9 winner Melvin Crispell III with a rendition of “What’s Going On?” Gospel music great Dorinda Clark Cole and Sunday Best season 3 winner Le’Andria Johnson made special appearances during contestant mentoring moments.
Season 10 premiered July 5th from Tyler Perry Studios in Atlanta, GA with a live audience and band, before transitioning to a virtual telecast in light of COVID-19. GRAMMY®-winning music legend Kirk Franklin served as host; and GRAMMY® winning songstress & host of "Get Up Mornings," Erica Campbell, GRAMMY® nominated artist & star of BET’s “American Soul” Kelly Price and GRAMMY® nominated & multiple Stellar award-winning artist Jonathan McReynolds returned as judges. Season 10 auditions were previously held earlier this year in Atlanta, GA at The House of Hope.
For updates and more information about “Sunday Best”, visit BET.com/SundayBest.
Posted by Breath Of Life Daily at 8:25 AM