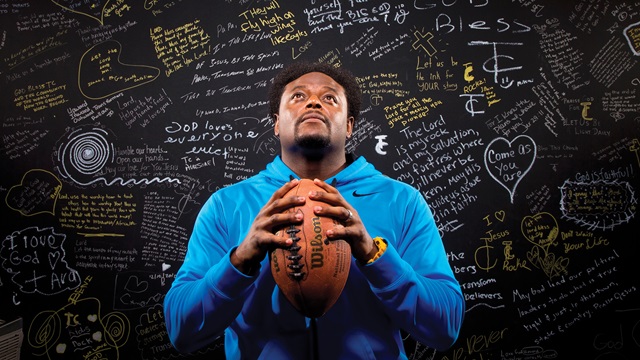 Growing up on the west side of San Antonio, I believed in god—the god of football. The game was my ticket out of an early life saturated with violence, addiction, abuse, and chaos.
I was raised by my grandmother, because my parents were only teenagers when I was born. They were children bringing a child into the world. As much as they wanted to care for me, the hurt and brokenness in their lives prevented them. "Grannie" was a Jehovah's Witness, so that was the religion I knew. After a while, even that went away.
We were not poor. We were "po." We couldn't afford the other o and r. We didn't eat meals together. We didn't pray together. There were good times, like when we'd go fishing or when my grandfather would come home after work in the evenings. By the time I was 13, however, I looked at my environment and told my grandmother, "I'm going to do something with my life."
Football was my way out of the hell I was living in. I believed it would lift me into the heaven of the American dream.
Football functioned as my savior. It gave me love: If I played well, I was loved by fans. It gave me an identity: I was Derwin, the football player. It gave me significance: I was somebody because I was a great player. And football gave me a mission. My mission was this: Derwin, you can go to college and make something of your life.

During my sophomore year of high school, I started to do just that. I transferred to Judson High School in Converse, a suburb of San Antonio, where I played for D. W. Rutledge, the Texas High School Hall of Fame coach. My senior year, I accepted a football scholarship to Brigham Young University (BYU). So, you have a black kid from a lower socioeconomic, multiethnic context with a Jehovah's Witness religious background (whose god is football) attending a Mormon university.
On January 15, 1990, during my freshman year at BYU, I met a beautiful young lady named Vicki Ensign. She was a javelin thrower on the track team. We fell in love fast and married on May 23, 1992, during my senior year. The first wedding I had ever attended was my own.
At BYU, my god had come through for me. I had an outstanding career and later was named to BYU football's "All Time Dream Team." Plus, I was loved at the school. I had the girl of my dreams. I was making something out of my life. On April 25, 1993, I was drafted by the Indianapolis Colts to strong safety. I had made it!
Then I met the Naked Preacher, a linebacker for the Colts in 1993.
It was impossible not to notice a linebacker who would take a shower, dry off, wrap a towel around his waist, pick up his Bible, and ask those of us in the locker room, "Do you know Jesus?" I would think, Do you know you are half-naked?
I asked the veterans on the team about him. They said, "Don't pay attention to him. That's the Naked Preacher."
At this point in my life, I did not want anything to do with Jesus or a half-naked man talking about him, so I tried to avoid him. One day after practice, I was sitting at my locker and saw the Naked Preacher (whose real name is Steve Grant) walking toward me.
"Rookie D. Gray, do you know Jesus?" he asked.
I pretended to not hear him and turned my back. He repeated the question, but this time he was at my locker. Even though I was not a churchgoer or involved in any religious group, I gave what I thought was a very religious answer: "I'm a good person."
I explained to Steve that I was one of the only men in my family who had not been to jail, who did not have a substance abuse problem, who had graduated from high school and college, and who did not have a child outside of marriage.
The Naked Preacher opened up his Bible and shared two verses with me: "And Jesus said to him, 'Why do you call me good? No one is good except God alone'" (Mark 10:18, ESV); and, "For all have sinned and fall short of the glory of God" (Rom. 3:23).
Steve explained that according to the Bible, only God is good; he is the standard of goodness and righteousness. Everyone else has sinned and falls short. This disturbed me.
I said, "Naked man, you are telling me that my moral comparison is to God and not to other people?" He said, "Yes."
"God is perfect! What can I do to be perfect?" He answered, "Nothing."
I said, "I'm in big trouble."
"Rookie D. Gray," he said, "now you are starting to get it. You can't do anything to reach a perfect God. But Jesus has done everything for the perfect God to come down and reach you."
I sat in silence. I needed time to think through what he was saying and what I was experiencing in my heart.
Over the next five years, I watched Steve live out the gospel. When my teammates needed advice, they were at the Naked Preacher's locker. Steve was involved in the greater Indianapolis community. He displayed Jesus in the way he loved his wife and children. He preached through his words and actions.
As the Naked Preacher preached, God's love crushed me. I had achieved the American dream, only to realize it could not empower me to love my wife or forgive my father. My fame and money could not erase my sin, shame, guilt, fear, and insecurity.
... Continue reading Derwin's powerful testimony here.