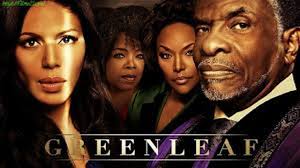 On May 3rd, The Own Network Series "Greenleaf" announced that Season five would be it's last season. The final season will be returning in June with no exact date given.

The previous four seasons are available to stream on Netflix. In it's duration The series from Lionsgate won the NAACP Image Award for Outstanding Drama Series this year, as well as back to back wins (in 2019 and 2020) for star Lynn Whitfield (Lady Mae Greenleaf) in the Outstanding Supporting Actress in a Drama category.

In an official statement Greenleaf's Writer/Executive Producer Craig Wright said from the beginning him and Oprah knew they wanted to end the series after 5 seasons. Watch the official video to hear his remarks below:

What are your thoughts about the series coming to an end? Leave your thoughts in the comments section below and connect with us online @BOLDJournal on all social media networks to follow the conversation.

Posted by Breath Of Life Daily at 9:06 PM