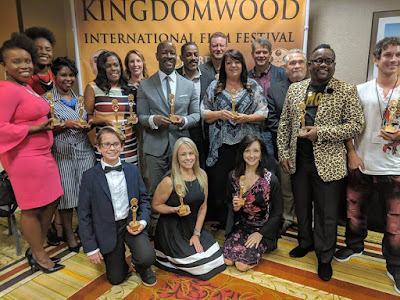 The official Kingdomwood International Film Festival held in Atlanta Georgia from October 4-7 2018 brought out faith-based filmmakers and enthusiasts from all around the world. The Festival celebrated it’s 10 Year Anniversary with confirmation from Atlanta Mayor Keisha Lance Bottoms and welcomed attendees with an exquisite celebration gala. #KIFF18, as the event was dubbed on social media, presented an empowering celebration of family-friendly creativity.

A VIP Red Carpet screening of the film “Indivisible” premiered at the festival prior to it’s national release date. The film based on the extraordinary true story of Army Chaplain Darren Turner, includes Sarah Drew, Tia Mowry, Eric Close, and Michael O’Neill as a part of it’s all-star cast. The film will be released in theatres October 26, 2018.

Georgia Film Academy, Georgia Production Partnership and The Georgia Department of Film, Music, and Digital Entertainment participated in and helped sponsor the festival.

Kingdomwood Founder’s Audrey T. Thomas and Joe W. Williams presented statues to the winning films chosen at the Filmmakers/Screenwriters Award Show given during the the festival’s closing day.

The Film and Screenplay Winners can be viewed on the official festival website: www.kingdomwood.com along with other information. Kingdomwood’s founders extended a special thanks to all the filmmakers, screenwriters, actors, actresses, volunteers and amazing attendees that participated. In closing remarks the organization says it will continue it’s aim to “Reach”, ‘Teach” and “Inspire” through film.
Posted by Breath Of Life Daily at 5:16 PM